Mix up a batch of cinnamon roll dough. I recommend this one.

Create a half recipe of this fabulous cranberry sauce. When finished, puree with an immersion blender if possible. Let cool.
Spread lightly onto your rolled out dough. Roll up, removing any extra sauce. Cut into 1.5-2” pieces, place in greased pan. Cover with wrap. Let rise till doubled in size. Heat oven to 350 and bake till lightly golden on tops, approximately 30 minutes.

Well, the three weeks of cooking for TIB have definitely simmered well. It’s rather difficult to believe that it’s already over.

At first the language barrier was overwhelming and at the end of the day, all I wanted to do was hang out with people who spoke English… but I am learning to communicate with my hands, be vulnerable, and laugh. A lot. Because who expects to speak a language perfectly without learning and making mistakes?!  It’s a stretch, but living outside of our comfort zones is good for us!

Cooking with Solange was never boring. Joyful, resourceful, and efficient…always keeping things interesting. I loved working with her for these reasons! One afternoon we went for a walk around the property and she found various fruits for future use in the kitchen. The green mangoes were brought back for snack, and the next morning 2 of us were sent out to gather the rest.

Behind our house is a lemon tree, so we have frequented it for fruit. Lemon and garlic seem to be the stronger flavors that are appreciated here. With the amount of beans that are made each day, it takes a lot of garlic for one week.

Another fruit she cooks and sweetens is what we call Jackfruit. You pick out the pockets around the seeds, pull the seeds out and eat the pocket. The ‘pulp’ around the pockets is sticky, so try not to get it on your clothes. Monday afternoon we got to the kitchen and found that someone had delivered 5 Jackfruit for us to use. We were pretty tired, so they weren’t the nicest thing to find, but it definitely made for a memorable evening!

Everyday Marlena or Carolina baked bread for the next morning’s breakfast.

When we had a few minutes, Carolina and I tried learning English/Portuguese, using a dictionary someone lent to us. She’s the best student, trying to learn all she can and makes me wish I knew how to teach English as a second language. (Besides knowing more Portuguese!) One day she and Solange tried getting me to teach them the vowel sounds and after a few tries I gave up. English is complicated. How in the world can I explain it without knowing their language?!

Time flies when you’re having fun they say, but in my life, it seems to fly when I fly. (Aka, when my schedules or suitcases are packed.)

Mentally it feels like longer than a week ago that I packed my bags in that wonderful ‘last minute rush’ to get to RDU and on the plane… My sister Mari so graciously gave a lot of her day in taking me to the airport, but I think Jenica was bit unhappy about not getting free from her carseat to join me in this adventure. (Just kidding, but honestly- I’m hoping that one day we will go places together.)

After bidding them goodbye, I rushed patiently (if there is such a thing) through security, and got to my gate with 5 minutes to spare! I had a 4 hour layover in Miami, so I took my time getting to my gate… observing the sunset, meandering along beautiful artwork and adjusting as much as possible to the idea that in a few hours I would be leaving my home country. 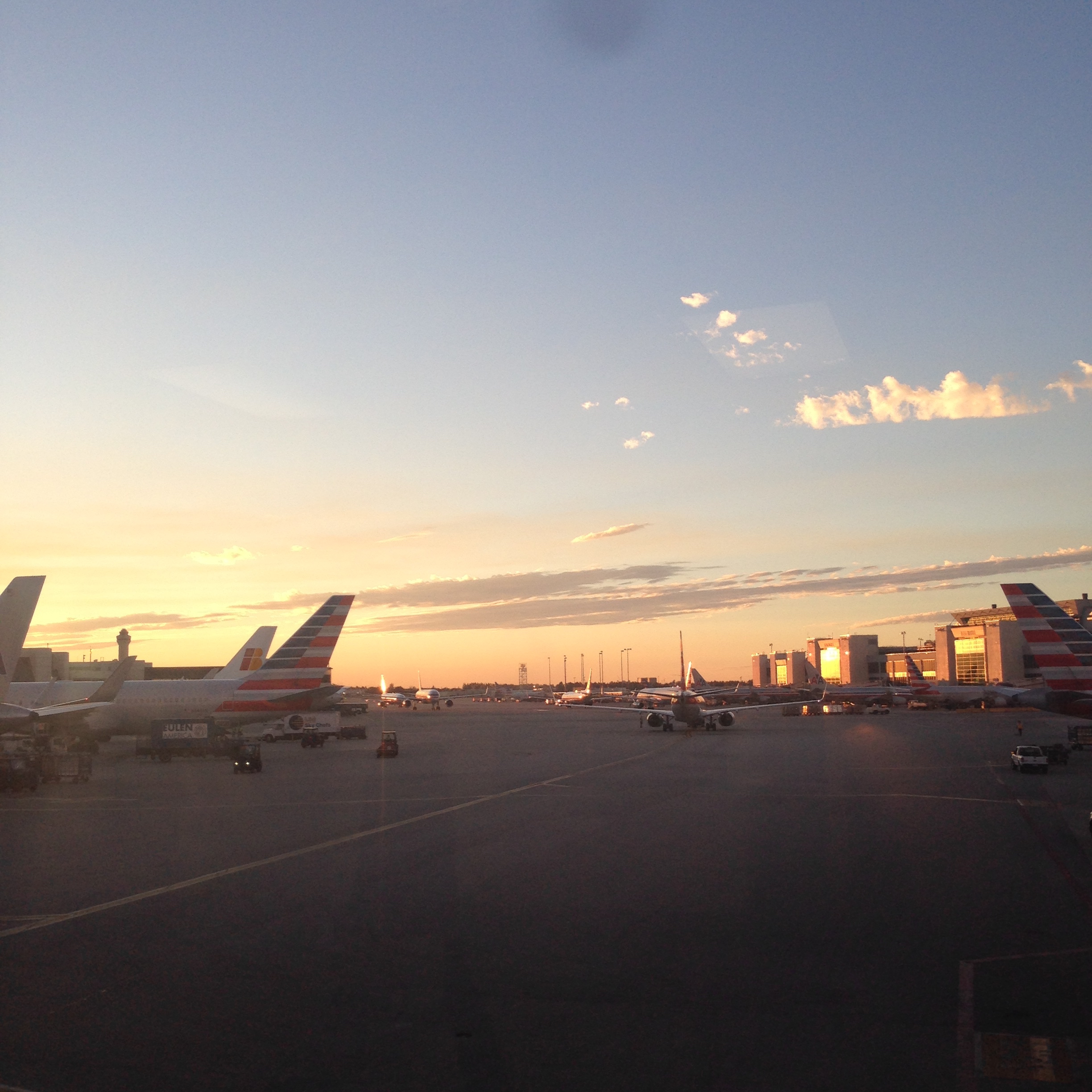 After what felt like several miles, I reached my gate. Boarding the flight to Brasilia,  I was so blessed to have 2 seats to myself- by the window, nonetheless! It was wonderful to be able to stretch a bit and sleep! Already I was submersed in Portuguese, and it felt rather overwhelming. I soon realized what a kind gift from God it was to have this little bit of ‘privacy’ on this flight, and was so grateful for the space and time to process/prepare before entering this new country!

Supper was served around 10:30 by TAM and a mere 5 hours later, we were served breakfast. Within 2 hours, we landed in Brasilia! Going through customs I learned that one needs to put her trust in God and walk confidently. Waiting on luggage, it seemed like personal space is approximately 6 inches so I learned to step forward and stand right next to the carousel.

After customs I got to check in for my domestic flight which took awhile, but went fine. Once on board the flight to Cuiaba, we taxied and waited for about 30-40 minutes before takeoff. This was about the worst flight of my life with lots of turbulence…but hey- I’m alive and it’s Brazil, so what’s to be expected??

After the luggage was claimed, I eventually found Mike, who was picking up two of us Americans that day. We waited about an hour until Matt arrived, then went shopping for a few groceries since we had been told that we needed to cook for ourselves the first few days… That was a little overwhelming, but very educational!

Cuiaba is about an hour from the Ami Training Centre, so we stopped for lunch just outside of the city. The scenery along the way was so beautiful… Cuiaba is kind of in a horseshoe-shaped valley, and Chapada is up on the plateau, which makes it a lot cooler.

(Follow this link for an overview of the training center.)

Upon arrival I was warmly welcomed by Cristy Van Oosten. After a brief nap I was refreshed enough to enjoy a delicious dinner of chicken pot pie at her house. Erik & Cristy their 2 young boys, Benjamin (9) & Daniel (6?) are on staff here at the Centre.

Mike & Kelly are working on Bible translation for a tribe who is in a bit of a political hotspot. Because of this, they (and their 2 daughters, Emily & Lydia) have recently moved to the centre here, where a few of the tribe members are attending Bible School. Pray for them and the work in that tribe if you would…the anthropologists and the government do not welcome the entrance of the Word of God in this tribe.

Dave and Kay Greiman are on staff here, having lived in Brazil for around 20+ years. Their daughter is married to a native of the same tribe who Dave was first introduced to when God called him to Brazil. Pretty cool.

After a good night of rest, Cristy took me on a tour of the facilities. There are mango, avocado, banana, papaya, lemon, and jackfruit trees scattered throughout the place. The boys were delighted to inform me that we may be able to spy the monkey in the woods behind my house sometime! The centre was already in operation back in the 80’s, so a few of the dorms are older, and new duplexes are still in progress, but with a lot of staff on vacation or furlough, there’s no lack of space.

During the last week we did a lot of cleaning in various dorms in preparation for the students’ arrival on Saturday & Sunday. Cleaning the bathrooms/showers was probably my favorite job, because you just scrub a little, throw some soap and water on the tiles and brush it all out the door with your broom!  Now if only we could be this efficient in America… 🙂

We also put together personal hygiene packs for the students to use while they are here:

Edson & Teresinha are the coordinators, and arrived on Wednesday. They’re a great team. Edson was from a nearby indigenous tribe, and Terezinha is from Brasilia. She lived in the States for a year or so before getting married and knows plenty of English. It’s wonderful to have her here!

By Sunday evening most all of the 7 participating groups had arrived, and we had a short but rich worship service together. (Originally they were preparing for 11 groups, but 5 backed out for various reasons.)

Monday morning we started cooking full swing. Solange (So-LAWN-gee) is the head chef, and Carolina, Marlena, and I are kitchen help. Breakfast usually consists of bread, coffee, chai, and hot chocolate. Lunch and dinner are variations of rice, beans, salad, meat and potatoes and sometimes squash. We also serve a snack to the students at 10 and 3. This usually consists of cake, biscuits (crackers), or fruit, along with juice or chai tea, and coffee. The coffee generally is quite strong and sweet which is great!

Marlena, Mathias, Carolina, and I.

Cooking with this crew is fun. They don’t speak English, and I don’t know more than a few words in Portuguese, so we get by with hand motions and such. Everyday my Portuguese vocabulary increases, and they learn more English. This method of learning is so much nicer than an app, and much more memorable! 🙂